“The Hunt team gets an A+ for customer service and engineering excellence.” -Edward Cook, owner, Harrier 25 #113 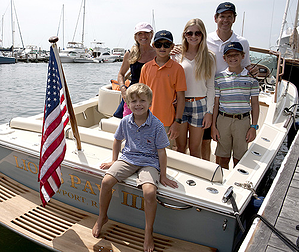 The Cook family, Karen, Edward, Kabele, Wills, Prescott, and Conrad, traveled to Rhode Island to take delivery of their new Harrier 25, hosting a gala christening on the docks in Newport before boarding the boat for a trip to Nantucket.

Writing from Nantucket, Edward says, “Our beautiful Lions Paw III is a true joy and has been the subject of much attention and commotion at the Nantucket Boat Basin. Many people have come by and given her quite a few accolades. Everyone is entranced with her 'eyeliner' as my bride, Karen, would call it (her beautiful teak windscreen). Above all, she is a Hunt hull through and through and a great ride for a safe and sound crossing for a family of six with four ‘Cook Cubs’ as we call them!”

The boat is named after the children’s grandfather’s beloved boat, Lion’s Paw II. As Edward tells the story, his father chose the name because his father (the children’s great-grandfather) was a Freemason, for whom the lion’s paw is a significant symbol. "Think 'National Treasure'," he says. 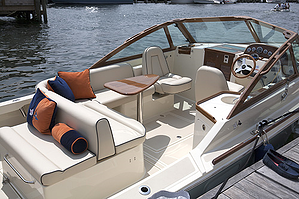 The boat is equipped with customizations that include a water heater, heated cockpit blowers, and a very special stereo system. For propulsion, it features a Volvo diesel inboard v drive. This was chosen, says Edward, because “she will be relocated to the waters of Newport Beach where she will be at our private dock and in the water 365 days a year. Her inboard diesel running gear is simply put the finest and best situation for a year-long motor launch. “

At the conclusion of the family’s trip to Nantucket, the boat will ship west to the Cook home in California. We look forward to following their continued adventures aboard Lions Paw III.